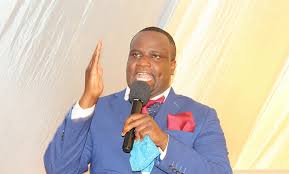 Controversial Prophet Tapiwa Freddy of Goodness and Mercy Ministries posted a video in which he said married Zimbabwean men should not divorce their cheating wives, for divorce is a sin in God’s eyes.

Prophet T Freddy urged husbands not to divorce their wives even after catching them pants down with other men.

4 “Haven’t you read,” he replied, “that at the beginning the Creator ‘made them male and female,’[a] 5 and said, ‘For this reason a man will leave his father and mother and be united to his wife, and the two will become one flesh’[b]? 6 So they are no longer two, but one flesh. Therefore what God has joined together, let no one separate.”

This is not the only shocking incident from the prophet who, Last week, posted a controversial video in which he was dressed as a woman.

He defended his cross dressing as an expression of art.

Apostle Chiwenga Confession : It Pains Me To Give My Parents Money