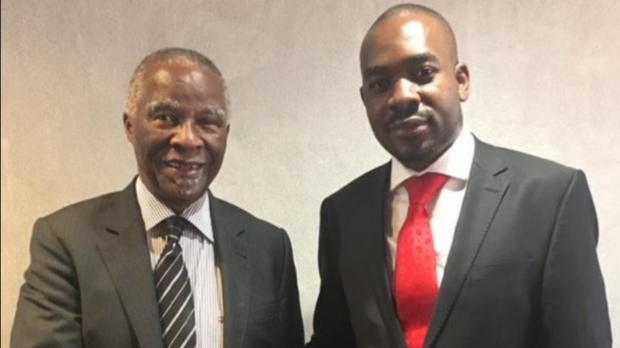 Gambakwe Media Sources have revealed that Nelson Chamisa will join the next POLAD in Kadoma this week.

Frantic efforts have been underway to convince Nelson Chamisa that POLAD is a good platform for him to sit across the table with ED Mnangagwa.

Former South African President, Thabo Mbeki has also been roped in and will likely attend the next POLAD meeting.

It is during this next meeting that the Agenda for POLAD will be formalized and focus groups and thematic committees will be set up.

Nelson Chamisa has hit a brick wall in his attempt to force ED Mnangagwa to the table outside POLAD.

Chamisa has also failed in his attempt to call for Mass Action after police descended heavily upon demonstrating MDC Members in Harare.

Chamisa and ED Mnangagwa both met Thabo Mbeki in Harare this week to discuss Nelson Chamisa ‘s involvement in POLAD.

Chamisa has been linked with the Grace Mugabe G40 Faction and will have to consider various stakeholders before making a decision.

Ordinary members of the MDC are firmly against POLAD and Chamisa is likely to face an open rebellion from his leadership team that are against POLAD.

Last week, Douglas Mwonzora ‘s call for POLAD was met with open resistance by members on Social Media who feel that ZANU PF has not reformed and having a Dialogue with Mnangagwa will result in no change in the circumstances in Zimbabwe.

Chamisa will also have to recognize Mnangagwa as the winner of the 2018 Presidential elections if he was to join POLAD, and appears to have softened his stance in recent speeches.

Chamisa coming to POLAD would mark a new chapter but will further complicate the leadership structures in both ZANU PF, MDC-T and MDC Alliance.

Dr Thokozani Khuphe, leader of the MDC-T splinter group of the MDC, is also in POLAD, and the two (Chamisa sn Khuphe) have not resolved their issues.

Both Nelson Chamisa and ED Mnangagwa will have to compromise and the coming in of an international mediator would allow the two sides to move forward. However, Zimbabweans have little confidence in Thabo Mbeki, who facilitated the last GNU that was in favour of ZANU PF.