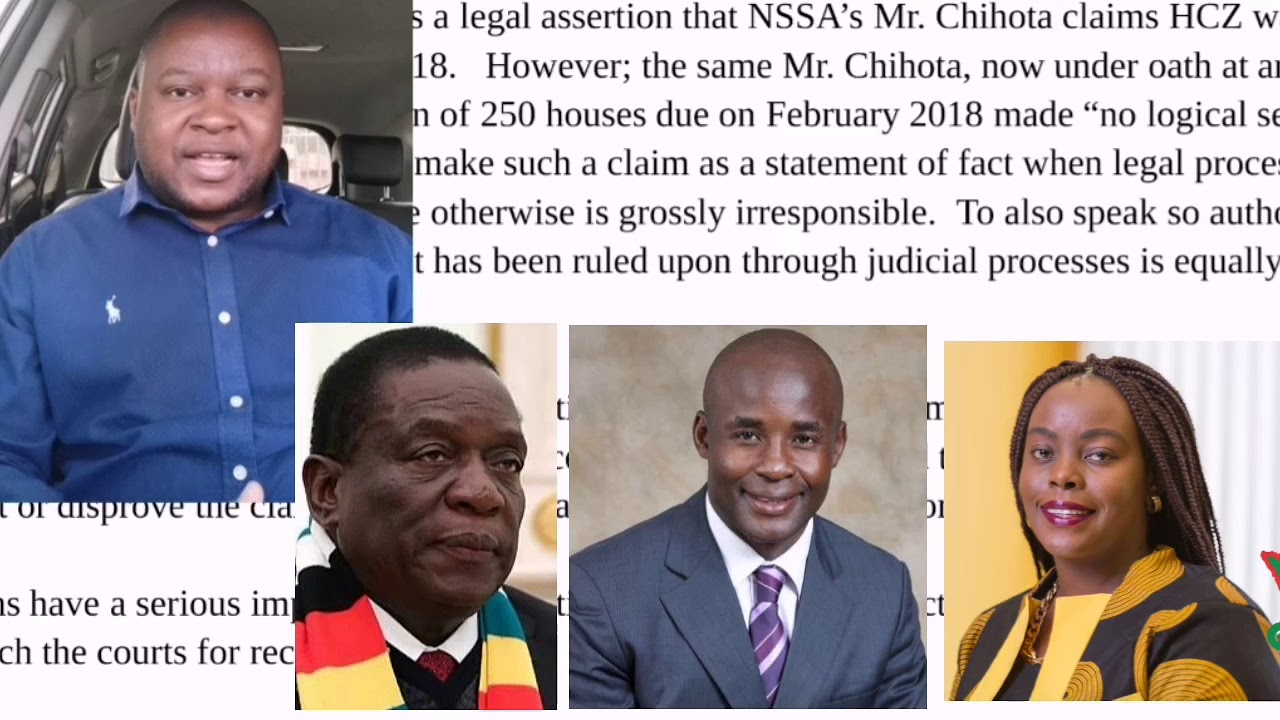 It has emerged that NASSA was ordered to pay HCZ a sum of $30 Million for Breach of Contract During Arbitration. HCZ also says that most of the findings in the BDO report are Unsubstantiated.

Following defamatory remarks made by the former ZACC Commissioner Mr. Goodson
Nguni in May 2018 wherein he made false accusations against HCZ and its directors, which
have subsequently been proven false, we would like to place it on record that there is a
continued desire to defame and misrepresent the HCZ matter.

● Allegations/Unsubstantiated Claims made by BDO in their “so called forensic report” are
nothing short of alarming in so far as they relate to HCZ and not expected from a firm
that is supposed to be professional and a member of an internationally reputed group.

● In the first instance we would like to place it on record that we support Government’s
attempts to address the scourge of corruption bedevilling our nation.

● However; we believe institutions given the tremendous responsibility to assist
Government in investigating and bringing such issues to the fore, must do this
professionally and in an unbiased manner whilst also exercising principles of natural
justice and protecting the rights of all parties.

● This issue is a civil matter which has been disposed of in an arbitration whose ruling has
mandated NSSA to pay $30m damages to HCZ for the deplorable manner in which they
aggressed against HCZ.

● The only position presented in the “forensic report” is that of NSSA who aggressed
against HCZ and who obviously are aggrieved by having lost such a serious damages
claim.

● BDO is then subsequently assisting the same NSSA to defame HCZ under the cover and
guise of a “forensic report”
In the particular report the following key claims need to set straight.
▪ An alarming claim of a $104m POTENTIAL prejudice to NSSA by HCZ is made.
This “potential prejudice” referred to is premised upon nothing else other than a fallacious
statement by BDO that “other 4 roomed houses” in Dzivarasekwa were $13000 cheaper
than HCZ units and thus this difference multiplied by the number of units that were in the
contract, which contract was terminated in 2018, creates a potential prejudice of
$104million! Only a fully securitized deposit of $16m was paid by NSSA to HCZ and
thus forensic proof of a loss beyond the actual amount outlaid is a first of its kind.
Forensics cannot be about conjecture and imaginary losses but evidential fact that can
stand the test of any competent court.
▪ The investigators never interrogated the cost build up which was approved by NSSA
to ascertain whether there indeed was an inflated cost in the HCZ price. This would
have created an opportunity to flag any inflated costs. The HCZ cost was fully
ventilated by an expert South African quantity surveyor in the arbitration proceedings
between NSSA and HCZ which HCZ won.
▪ The point is the HCZ house was a fully finished unit inside and out whereas the
Dzivarasekwa units were shell and core units which required a lot of additional work
by the purchasers to be complete

▪ Simply looking at the facets included in our houses but missing from Dzivarasekwa
houses of:
1) Ceilings and cornices plus painting to same
2) Stone sub floor and damp proof and pest repellant protection
3) Bath tubs and tiling to showers
4) Tiles to bathrooms and kitchens
5) Painting to front doors
6) Fitted kitchens and cupboards
7) Fitted cupboards in all 3 bedrooms
8) Fascia and soffits on the roofs
9) Gutters and down pipes
10) Cobble driveways
11) Rain water drainage collection around the house to the storm drain
12) Floor finishes
13) 73m2 house vs 60m2

▪ These facets alone amount to more than the $13,000 price differential and thus if the
BDO investigation had cared to do any actual work, this would have been apparent
and saved the nation these false and malicious claims.

▪ The houses built by HCZ are 3 times stronger than the houses being compared and
BDO should have sent engineers to go and test and prove/disprove these claims
▪ Thus the false price difference assertion by BDO is akin to saying a Toyota and a
Mercedes should be the same price because they are all 4 doors! Surely our Chartered
accountants can do better than this!

▪ Page 42 of the BDO “forensic report” makes false claims that HCZ has no track
record of executing projects of such magnitude.
With due respect, if the BDO investigators had cared to look at the Investment Memorandum

(IM) submitted to NSSA by HCZ, they would see the CEO of HCZ was the Managing
Director of the largest listed construction company on the Johannesburg Stock Exchange
having run multi-billion dollar projects in Europe, Asia, Middle East, and Africa. The
Developments Director of HCZ was responsible for managing a $10 billion power station
build in South Africa in addition to many other large scale projects in Australia and
around Africa. So a $300million project was a walk in the park.

▪ HCZ was given the contract despite not having title to the land.
The contract was clear that title deeds could sit with reputable legal firms and NSSA, and their

lawyers on this transaction, were fully aware that the title deeds were sitting with one of
the country’s top 5 legal firms. As well, NSSA was aware HCZ had used the very deeds
to procure the $16million guarantee issued to them by Zimnat. How HCZ could use title
deeds as security if they had no rights to those title deeds, evades us. This speaks of
negligent, agenda based “investigation” by BDO.

▪ The contract was awarded without following due process.

Whilst we cannot, as HCZ, speak of what transpires with NSSA processes, we submitted our
Investment Memorandum in February 2017, contrary to the June 2017 date cited in the
BDO report. If the investigators had bothered to verify their facts they would have
realized these facts were provided to the Zimbabwe Republic Police Criminal
Investigations Department, CID, in May 2018 and a copy of the IM submission of
February 2017 was provided to the authorities to debunk this gross misrepresentation.

▪ The report is fraught with so many inconsistencies on the same matter.

▪ Page 30 of the report has a table claiming HCZ delivered no houses and yet on
page 74 of the same report the investigators claim they visited the site and saw 53
completed houses and 57 at various stages of completion.

▪ The report speaks of NSSA having been interdicted by the High Court from
calling the HCZ Guarantee from Zimnat but fails to disclose in the “forensic
report” which was published on 4 March 2019 that on 22 February 2019 an
arbitration award was made AGAINST NSSA for breach of contract, and an
award of $30 million was made in favour of HCZ. That such a material omission
which lays bare all the facts can be made by “forensic investigators” is either
grossly negligent or intentionally designed to cast aspersions and achieve a pre-
determined outcome.

▪ Page 74 of the report makes a legal assertion that NSSA’s Mr. Chihota claims
HCZ was to deliver 250 houses by February 2018. However; the same Mr.
Chihota, now under oath at arbitration went on to say the NSSA position of 250
houses due on February 2018 made “no logical sense”. Thus, for the “forensic
report” to make such a claim as a statement of fact when legal processes and
arbitration transcripts prove otherwise is grossly irresponsible. To also speak so
authoritatively contradicting a contract that has been ruled upon through judicial
processes is equally shocking.

HCZ and the Directors of HCZ take great exception to the malicious claims made by the BDO report and these would all have been awarded if natural justice had been followed and
they had asked for documents to support or disprove the claims they make against HCZ
and its Directors.
Such claims have a serious impact on the reputation of HCZ and its Directors, and processes are
being taken to approach the courts for recourse.